Before and after of a chin augmentation patient with a vertical lengthening chin implant.

Chin augmentation is life changing! Maybe not life-saving but certainly life changing when you look at the results to the left and below. With new technology, implants can do things that would have required cutting the jaw bone in the past.

To understand what has changed, some background is necessary. By making a small incision behind the chin, an implant can be placed and give more projection to a small chin. However, an implant could only provide improvement in the horizontal direction. In other words, it could provide projection but not lengthening of the chin/jaw. As in the case below, the patient’s concern was more in the vertical direction (he wanted a fuller, longer face), not so much in the horizontal direction.

In the past, to gain this vertical projection, the chin bone would have to be cut with a saw and then repositioned with plates and screws to improve the chin position in the vertical direction. For obvious reasons, the idea of sawing the chin and jaw in half could scare patients. Luckily, things have changed for the better.

From the folks at Implantech, maker of facial implants, we now have the Vertical Lengthening Chin Implant (VLC Implant). The VLC implant is “designed to address a three-dimensional chin deficiency.” The “implant secures to the lower edge of the…jawline to provide both a downward 45-degree augmentation and a horizontal projection.” This “creates a more elongated face and triangular jawline-chin shape.” 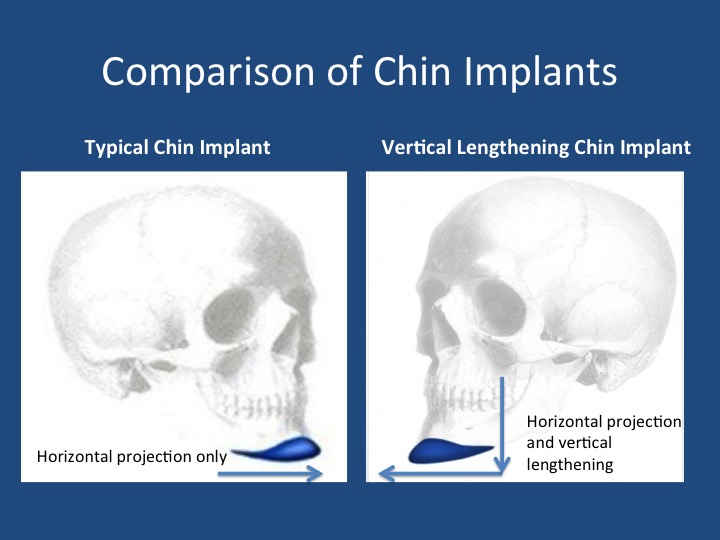 Seeing is believing. Check out these photos below.

Three-quarter view, before and after chin augmentation

Frontal view, before and after chin augmentation

Side view, before and after chin augmentation

For these results, a typical chin implant would have given more projection to the chin but not provide for a fuller looking chin and jaw. With the VLC implant, this is now possible without cutting the jaw bone.

To find the cost of chin augmentation and a surgeon near you, click here.

3 thoughts on “A new era in chin augmentation!”