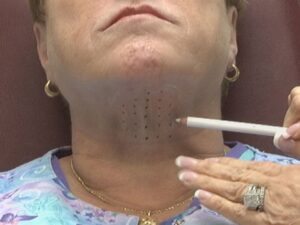 Markings show the injection points required for treatment with Kybella. Courtesy of abcnews.com

The latest and greatest is here! Now it’s time to see if the new Kybella treatment to dissolve fat in the neck/under the chin is all it’s cracked up to be. A recent NY Times article talks about this newly approved injection that can dissolve fat with injections but no surgery.

Kybella uses the chemical deoxycholic acid to dissolve fat. This isn’t a new chemical but it is newly approved for this treatment. Obviously this sounds wonderful but let’s look at the numbers.

According to the NY Times:

Sixteen percent of patients who received the real injections saw a reduction of two grades in under-chin fat. Only 1.5 percent of the placebo group saw that level of improvement.

M.R.I. scans also showed that under-chin volume had decreased more in treated patients than in ones who received placebos.”

The biggest downside to this treatment is that it requires around 50 injections into the neck for each session, with at least 2-3 sessions for full treatment. While I am a doctor, I don’t like needles, especially 50 of them.

A potentially easier treatment that may be down the road is CoolSculpting to the chin/neck area. CoolSculpting is already FDA approved for freezing fat for non-surgical fat reduction of the love handles, abdomen and thighs. This technology does not dissolve fat like Kybella but rather freezes fat. CoolSculpting, word has it, is working on an applicator to use on the neck as well.

For pricing on liposuction or non-surgical methods of fat reduction, click here.

One thought on “Dissolve fat with an injection!”