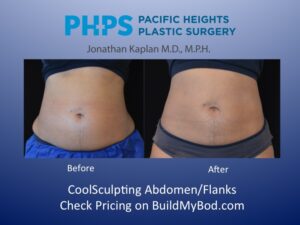 CoolSculpting is the FDA-approved nonsurgical treatment for fat reduction. After coming on the market in 2009, with over a million treatments later, it works. No doubt about it. This is the quintessential treatment for the American mentality! Why?

CoolSculpting is perfect for stubborn pockets of fat and doesn’t require any behavioral changes in the patient. Keep eating what you want and you don’t necessarily need to work out (get your cake and eat it too)! If that’s not American, I don’t know what is. But this statement does require some clarification.

Coolsculpting can reduce fat by 25% with suction cups connected to a machine that freeze and kill your fat. Subsequently, the fat is excreted through the kidneys and liver. The skin tightens as the fat is destroyed. Even better, the fat doesn’t come back.

Liposuction is still a great option, that can remove more fat, but it does require surgery. So you have to decide: no surgery no downtime, less aggressive results: CoolSculpting. Very small incisions with the need for anesthesia and surgery but with more extensive results: liposuction. Either way, you can check pricing from a doctor near you here!

One thought on “CoolSculpting: The All-American Treatment”