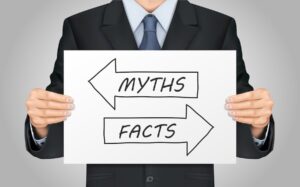 As a plastic surgeon, I’ve heard many myths about aesthetic medicine. It doesn’t matter how often they’re repeated, it still doesn’t make them true. But consumers and potential patients certainly think they’re true after hearing them so many times. So here is the truth!

1. Liposuction – Myth: After lipo, I’ll get fat in other parts of my body!

Fact: Your fat isn’t that smart. It doesn’t change direction based on previous surgery. Sure you have fewer fat cells in the area where you underwent liposuction, so other areas may look fuller by comparison. But any fat intake you have will go to the same places it is genetically predisposed to go to.

For example, if most of your fat goes to your hips, it will continue to go to your hips even after liposuction to the hips. That’s why you should use liposuction as a launchpad to get in even better shape, not a shortcut.

2. Botox – Myth: I can’t lay down or work out after treatment!

Fact: Botox is not like sauce in a saucepan, it doesn’t slosh around after treatment. So when you lay down, the Botox will not diffuse over to your eyelid and give you a droop. If you get a droop, it may be because the Botox was injected too close to your eyelid in the first place.

3. Surgery in general – Myth: I can’t get the incisions wet

Fact: What’s the alternative to getting your incisions wet? They’ll just get grimy and sweaty if you don’t clean them. How is that good for a fresh incision?! Not everyone agrees so ask your doctor first but I recommend that my patients get in the shower the night following their surgery and let soap and water run over the incisions. This keeps them clean. However, do NOT soak underwater in a bathtub, swimming pool, lake or other body of water because you could be bathing in your own, and someone else’s, filth.

4. Tummy tucks and/or a breast lift – Myth: The scars will disappear eventually

Fact: You had an operation, and the only way to get rid of excess skin from the abdomen or breasts is to cut it out. That means incisions. You will always have those scars. Sure they may fade to the extent you’re happy with the scars but they will not disappear. This is also why incisions are often placed in areas that will be covered by clothing or under garments.

5. Breast augmentation – Myth: I have to get the implants exchanged every 10 years

Fact: Nope. There was a study years ago that showed about 20% of women who had breast implants had to get them exchanged after 10 years for one reason or another. Leaking implant, capsular contracture, malposition, etc. But that also means that 80% of women were just fine.

The study involved older generation implants. So if the study was done today with newer implants, the percentage could be even lower. Bottom line: if you’re happy with your implants and you know it, clap your hands…because you don’t have to change them out!

So that’s the truth on the matter. All 5 myths debunked. So tell your friends so we can put these 5 myths about aesthetic medicine to bed!

3 thoughts on “5 myths about aesthetic medicine”