I just took over another plastic surgeon’s practice here in San Francisco. He’s gone now and I’ve found some useful things in the drawers and cabinets. One thing I came across is a large selection of fountain pens. My predecessor was a big fan of fountain pens and they really do have an old-school, old-world classic feel to them. I’ve always been a ballpoint-pen man myself but maybe I could get used the nostalgia associated with these fountain pens. 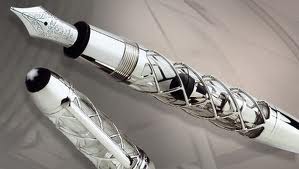 “There is no pleasure like a fountain pen.
Stress, thoughts, and ink alike flow out its end.” —mac47

The appearance of script from a fountain pen reminds you of old European books, illuminated texts pre-Guttenberg, calligraphy or the print in a Torah scroll. It takes some getting used-to how to apply the nib to paper and the potential for ink spillage when refilling the pen but wow, the pen itself and the writing have this other-worldly appearance.

But then I realized I use an electronic health record in my office and I typically call in prescriptions. I can’t remember the last time I used a pen.