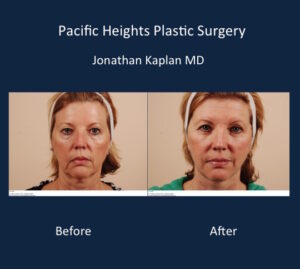 Just because it’s a facelift, there are still surgical risks.

Far and away, most cosmetic patients are young and healthy. Not much to worry about. But it’s still important to go to a real doctor that has had real training because they’ll pick up on issues that a doctor that learned about your procedure over the weekend might not catch. For example, a patient the other day told me that he had a clot form in his leg after his massive weight loss surgery.

A clot in the past might not be a big deal…or maybe it is? There’s a few things here: 1) you want to know why a young person had a clot in the first place. Then, 2) what can we do to avoid it happening again. The patient was quite sedentary after his massive weight loss procedure which can contribute to blood clots in the legs, like sitting down for a long airplane flight. We ordered an ultrasound of his legs to confirm that his previous blood thinning treatment had dissolved the blood clot which it did. Since we’ll be operating on him again, we need to reduce the risk that a new clot doesn’t form.

Next, we ordered an SCD machine (sequential compression device) machine that squeezes the calf muscles during surgery to reduce the risk of a clot forming in the deep veins of the lower and upper legs. If no blood clot forms in the legs, then those clots can’t travel to the lung and kill the patient during a massive pulmonary embolus. Additionally, a form of heparin called lovenox is a great way to minimize blood clotting. This is given right before surgery and for several days after surgery while the patient is recovering.

Therefore, you can’t minimize past medical history when it comes to surgery – any type of surgery. Just as no one wants a patient dying during any operation, there’s something particularly awful about dying during a cosmetic procedure, a surgery that didn’t have to happen. So make sure your doctor is board certified and doesn’t gloss over any detail just because it’s a cosmetic procedure. And it’s not just on the doctor to pay attention to detail. You be sure you don’t leave out any detail about your past medical history when discussing your care with your doctor!

For pricing on any cosmetic procedure of interest from a doctor in your area, click here.