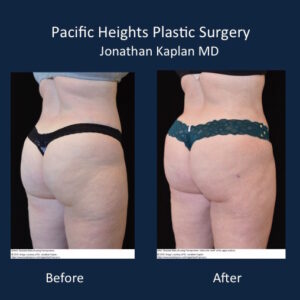 With the recent rise in interest for the Brazilian Butt Lift, many questions come to mind. What makes it Brazilian? Should I use implants or use my own fat? Those answers and more will be answered below.

Thanks to Kim Kardashian and J. Lo., everyone wants a fuller derriere. Regardless of what anyone thinks, I’m going on record as saying their buttock fullness is real, no surgery. In light of that, it’s very hard to get full, long lasting results that look as good as theirs, simply because it’s hard to recreate what comes naturally!

The Brazilian Butt Lift was possibly developed in Brazil or maybe it’s just because Brazil is very much into plastic surgery and their women have naturally voluptuous curves. Regardless, there are two primary ways to augment the buttocks: silicone implants or using fat taken from the same patient during liposuction.

Implants can provide the most dependable result that lasts but the major downside to implants is the risk of extrusion (implant coming out of the incision) or infection. If implants become infected, they must be removed and all that money paid is lost. If you want to avoid those risks, then you can undergo liposuction to the abdomen, flanks, thighs, lower back and capture all of that fat in a sterile canister. Your surgeon will then inject the purified fat into your buttocks.

With fat injections to the buttocks, you will avoid the risk of infection associated with a foreign object in your body like an implant. But it is well known that 50% of the fat injected into the buttocks will be reabsorbed over 6 months. Whatever fat is left over after 6 months stays. This is why most surgeons inject as much fat as possible, assuming that you’ll still have a nice result after some reabsorption. Even if much of the fat reabsorbs, you’ll have a bigger buttock by comparison. Let me explain.

In the process of performing liposuction to the lower back and flanks, your waist will appear narrower and by comparison, your preoperative natural buttocks will appear bigger. So even with fat reabsorption, you’ll be pleased with your new contours.

To check pricing on the Brazilian Butt Lift from doctors in your area, click here.

One thought on “Brazilian Butt Lift with Implants vs Fat [video]”