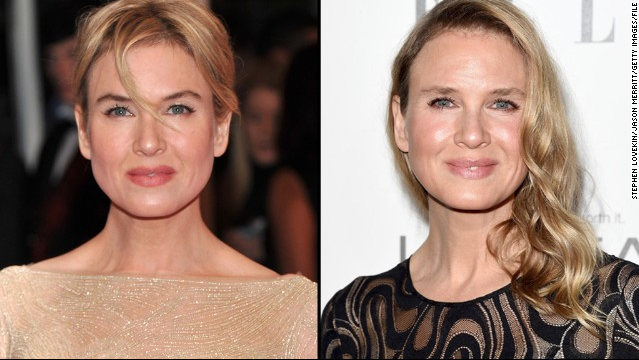 On the right, Renee Zellweger at the 2014 Elle Women in Hollywood awards on October 20

In a recent post on CNN.com, the paparazzi’s photos of Reneee Zellweger attempt to showcase how much the actress has changed after being out of the spotlight since 2010. She appeared to change so much that the article’s title is “Is that you, Renee Zellweger?” They’re wondering what cosmetic surgery she had and why she looks so different. Slow down. In my expert opinion, I don’t think it’s as drastic as all that.

Compare her nose, her lips and her cheeks between the earlier photo on the left and the current photo on the right. What do you see? I think her nose, lips and cheeks look exactly the same. The only changes I notice are a different hairstyle, maybe thinner skin…all things that can change with fads and age, but not cosmetic surgery….maybe cosmetic medicine, as in Botox, but not necessarily surgery. I think the most significant change that makes you think she’s has cosmetic surgery is simply two things – her eyebrows and forehead.

The eyebrows and forehead can make you look younger, older, like you’ve gotten Botox or simply that you’ve given up, and no longer manicuring the brows anymore (which is what it looks like in Ms. Zellweger’s case). I really don’t see evidence of a surgical transformation. She has definitely aged in the sense that her skin is less full of volume and appears thinner. Maybe her forehead is a little larger. All things part of the natural aging process and Botox.

But the crazy thing is the feeding frenzy. Everyone online and on social media is crucifying her current look. Many articles, including this one, compare photos between 1997 and 2004. Do the math people – that’s almost 20 years ago! So she’s aged. Let it go. She probably uses Botox on her forehead to brighten her eyes. That, coupled with the change in how she manicures her eyebrows, can account for any changes we’re seeing. I seem to be the only one who “has her back” and believes that her transformation isn’t due to aggressive plastic surgery. Renee, any chance you have my back and can dispel the rumors of cosmetic surgery?!