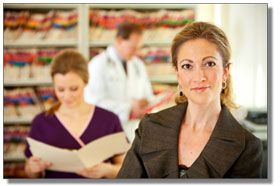 In the past, most plastic surgeons, or for that matter, the wives of most doctors that were in private practice, had the role of being the office manager. This was natural because a medical practice was very personal, not corporate, and who best to keep an eye on the dollars flowing through the practice than someone with a vested interest – the wife. And while most wives had no prior experience in business, they quickly learned on the job, probably making many mistakes but at the end of the day, made sure no one was stealing money from the practice. My mother was one of the few doctor’s wives that had a business degree and only started managing my father’s practice after selling a clothing store (thus having business experience before becoming an office manager). She may have made mistakes but far fewer than someone with no experience. But because she’s my mother, she more than likely made no mistakes.

The wife’s role in their spouses’ practice is changing. With many private, solo practicing doctor’s offices being replaced by corporate multi-specialty groups, the spouse’s role as the office manager is either evolving or disappearing altogether. Let’s assume that in the case of a corporate takeover of a medical practice, the spouse will not be allowed to continue as the office manager because of policies against family members in the same office. That spouse is pretty much out of a job. With that assumption, let’s focus on how the spouses of doctor’s offices that remain independent will evolve.

Spouse office managers will have to adapt to the changing forces around them, most notably the changes in medical marketing. Insurance billing will continue to be a bureaucratic morass, so that’s not really evolving or changing. However, the need to market your practice to the newly insured and the newly high-deductible insured will require capturing the prospective patient’s attention and explaining why they should come to your practice over another.

When it comes to medical marketing, it’s no longer about magazine ads or television ads. It can be about that but those types of media buys aren’t feasible for most. Medical marketing will come via the more affordable and sometimes free, social media. And who better to market via social media? Spouses in their 20’s. That’s right, most spouses of practicing physicians are in their 30’s and older right now and they didn’t grow up with social media. They were on the tail end of of the inception of social media but they didn’t experience social media during their formative adolescent and teenage years. Therefore, spouses that are in their mid to late thirties, while able to check their Facebook news feed, are not adept at using social media in a concerted marketing effort.

This means that over the next 10 years, or right now if you have a wife that’s part of the millennial generation, you will see a new generation of spousal office managers that do most of their marketing through social media. And that can be done from home or a coffee shop. In contrast to years past, the spouse doesn’t need to be in the office in the role of an office manager watching the flow of money now that most transactions are via credit cards and if done properly, inventory is checked regularly. I’m not suggesting money can’t be stolen, but it’s harder to conceal theft with online banking and by following the footprints of electronic transactions. No one is going to the bank anymore with large deposit bags full of cash…at least not on a regular basis.

What’s so fascinating is that the spouse will transition from an office manager to a marketing director, from being in the office to out of the office, better able to balance her life that may include exercise, kids, another job or running their own business. We’re entering a new age where the doctor’s spouse can do anything, including being a ‘he’ and not necessarily a ‘she’.

One thought on “The Plastic Surgeon’s Wife”