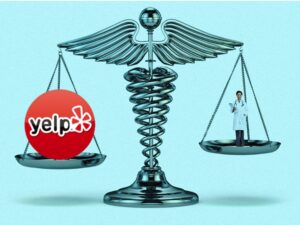 Courtesy of Medscape and Yelp

Your office provides excellent customer service. You offer every arriving patient a cup of coffee, tea or water. They never wait more than 5 minutes to see the doctor. You offer full price transparency online prior to the visit. The doctor encourages patients to email questions before a surgical procedure. The evening after the surgical procedure, the doctor calls to check on the patient, making sure the patient has the after-hours cell phone number to reach the doctor instantly via phone, text or email. No operator, no intermediary, straight to the doctor. That’s all you can do. It’s more than what most doctors do but it’s also the right thing to do. And even still, you get a negative review. Why?

You offer great customer service and you still get negative Yelp reviews?!

By and large, these negative reviews are from patients that were unreasonable from the very beginning. Either you didn’t give them enough postop pain medication because their demands weren’t commensurate with normal postop pain control but rather, more related to drug-seeking behavior; or you didn’t provide them with a free Botox touchup (even though you told them during the initial appointment they needed more, but they weren’t willing to pay for the appropriate amount, so you warn them that touchups won’t be “on the house.”) Typically negative reviews, after you’ve provided all of the niceties mentioned above, are from folks gaming the system, and in a way, extorting you to give them more of what they want for free…or else! Of course some negative reviews are legitimate and will be discussed below but I would argue they are the exception, not the rule.

Should you respond to negative Yelp reviews?

It’s time for doctors to recognize that sometimes the best option after receiving a negative review on Yelp is to do nothing. The customer isn’t always right and they don’t always deserve a response since their review often reflects deeper issues motivating their anger, issues that have nothing to do with your service. Most importantly, it’s very difficult to win an online verbal dispute. You can come off sounding defensive, unsympathetic, mean and accidentally reveal protected health information in the process.

One interesting aspect, specific to Yelp, is their algorithm. If the person writing the review, positive or negative, has only one to two prior reviews, all of their reviews are “filtered.” This means the reviews are moved to another page on the Yelp site where they’re deemed “not currently recommended.” Most consumers don’t visit this page. This is great if it’s a negative review but also frustrating if legitimate good reviews are filtered. The filtration algorithm is meant to ensure, in an automated fashion, that only the most credible reviews are left unfiltered for all to see. Because this is an automated process, many legitimate positive reviews are often filtered which is probably the single greatest source of small business owner’s animosity towards Yelp.

Why responding too quickly is never a good idea

Because reviewers that only have one to two reviews are typically filtered, you should wait at least four to five days before responding to any negative review, if you respond at all. For example, if a patient’s review of your practice is the only review they have ever written, it will most likely be filtered and no one will see it. However, if you jump the gun and respond to the review immediately, that will make that negative review appear credible in the eyes of the Yelp algorithm and you will have unwittingly made that review “stick” rather than allowing it to be filtered in due course.

As a general rule of thumb, don’t respond to any negative reviews. I understand this may fly in the face of other recommendations mentioned in this recent Cosmetic Surgery Times article, but if you provide excellent customer service, there’s not much more you can accomplish in responding to unreasonable negative reviews.

That being said, some reviews may reference being accidentally overcharged or some other legitimate issue. While it’s frustrating that the patient would resort to Yelp initially to voice their complaint rather than working directly with your office, your staff can contact the patient and right the wrong. Once you correct the situation, those patients will typically remove the review entirely and in some cases, give you that 5-star review you’re desperately seeking! Unfortunately, these legitimate gripes are the exception. As detailed below, some negative reviews can be related to underlying pathology that you’ll never be able to resolve with good customer service alone.

Has Yelp contributed to the current opioid crisis?

You can read more about this topic here, but there is pressure on doctors to accommodate almost any request by a patient for fear of getting a negative Yelp review.

After a long day of seeing 20 to 40 patients, doctors are human and start to find the path of least resistance. While they may have tried to reason with the 2nd patient that was asking for more pain medicine, by the 12th patient, they’re tired of convincing the patient they need to wean off their pain meds. Mix that with a patient that is vaguely threatening and you have a perfect storm where the doctor will pacify the patient one more time to avoid a bad Yelp review. This natural yearning to avoid confrontation is an understandable motivation to reduce your chances of a negative Yelp review, but you have to fight that natural instinct. If a patient is drug seeking, you can’t enable them, even if it means a negative review.

I’m not suggesting the opioid crisis is Yelp’s fault. But they are a cog in the system that has led to the current opioid crisis. When online reviews become so powerful, even doctors can be stuck between refusing to refill a narcotics prescription and in turn, receive a negative review versus possibly over-treating a patient’s pain. The threat of a negative review can’t be our guiding force – making appropriate medical decisions must be.

2 thoughts on “Negative Reviews on Yelp: The Physician Perspective”