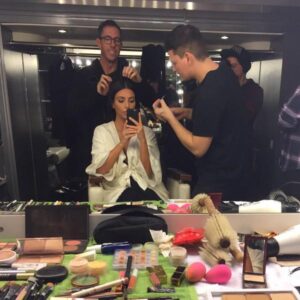 A facelift has incisions just in front and just behind the ears. But you usually can’t see them due to hair or makeup covering those incisions. This doesn’t mean the surgery wasn’t a success; it just means the patient wants to stay inconspicuous despite unavoidable scars. Makeup is an incredible tool to cover incisions but can be great for other postop plastic surgery magic.

For example, a facelift lifts cheek fat from the jowls (heavy skin near the jawline) and brings it back up to the cheekbone area. This is successful to varying degrees. The lift may look great initially but as swelling goes down, the fullness to the cheeks may lessen. With the right type of shadowing from your makeup bag, it’s possible to highlight the cheekbones to suggest more fullness.

In other words, every facelift won’t be a “homerun.” That’s a good goal but every operation can’t be perfect. Makeup, expertly applied, can give the patient the look they’re going for after a supporting role from their plastic surgeon. That foundation, with just the right shading can make you the envy of social media!

One thought on “Makeup after plastic surgery”