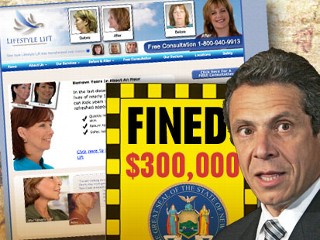 As first reported by the Wall Street Journal, Lifestyle Lift is shutting down after 14 years in business. The chain of facelift centers had built up a lot of bad debt and bad PR that finally caught up with them.

For those of you that don’t know, Lifestyle Lift (the website is still up but online chat is “offline”) was a nationwide business that ran TV ads encouraging patients to get a facelift in what appeared to be a very simple, risk-free procedure. Unfortunately, this was a sort of “bait and switch” scheme that got patients into an office with a non-physician who explained the procedure in an effort to have them sign up for surgery. The day of surgery was often the first time the patient would see their doctor and often times the doctor wasn’t even a board certified plastic surgeon.

Interestingly, Lifestyle Lift wasn’t even a particular technique or type of facelift. The name described a marketing plan, not a procedure. They were censored by multiple states’ Attorney Generals for their misleading advertisements.

Lifestyle Lift did bring a never-before-seen level of competition to your typical plastic surgery practices which led to a lot of bad blood. But just because they inserted some competition into the cosmetic surgery field doesn’t make them bad. Dishonest ads and less-than-professional operating room standards is what eventually led to their downfall. Offering patients surgery without adequate anesthesia just to lower the cost is a bad idea. It led to questionable standards of medical practice, unhappy patients, bad reviews and the attention of state regulatory agencies.

With the closure of Lifestyle Lift, we’re all safer.