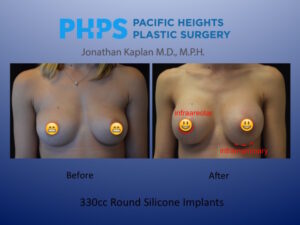 I know those words are a mouthful, no pun intended. However, if you’re researching breast augmentation, you’ll want to know your options. Both of these breast augmentation techniques involve an incision on the breast, not through the armpit. They’re both great for a straightforward breast augmentation. In other words, no lift, which can be accomplished with a perioareolar incision (all the way around the areola).

So what’s the diff: infraareolar vs inframammary breast aug

The main risk with this procedure is the close proximity to the nipple. Even with betadine to clean the surgical site at the start of surgery, some bacteria still lurk within the milk duct openings of the nipple. When bacteria touch the implant, that increases a couple risks. First, the implant and breast can get infected, requiring the implant to be removed down the road.

Second, the small amount of bacteria can cause capsular contracture, even if there’s no obvious infection. Capsular contracture is when the normal scar tissue that forms around the implant becomes really thick, distorting the breast. This requires a follow up operation to remove the scar tissue, which can still possibly recur.

With the inframammary incision within the fold below the breast, you also have pros and cons. The incision under the breast is well hidden. It’s also far enough away from the nipple bacteria to reduce the risk of capsular contracture (but not guaranteed). The main problem with an incision below the breast is the issue of ‘bottoming out.’ That’s when the implant shifts down after surgery, over time, and drops below the incision. Thus giving the breast a ‘bottomed out’ appearance.

To check pricing on a breast augmentation near you, click here.

One thought on “Infraareolar vs Inframammary Breast Augmentation”