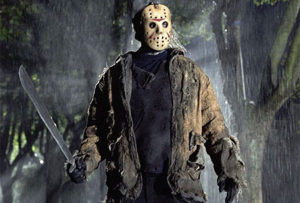 I thought this photo of “Jason” holding a large knife was apropos for a plastic surgeon! Courtesy www.horror-movies.ca

But where does our Western superstition of Friday the 13th come from? There are several theories listed here. It appears that Friday has long been considered an unlucky day in certain parts of the world, but this is clearly regional since Tuesday is unlucky in Spanish-speaking countries and in Greece. 13 is historically an unlucky number because it was one-off of the lucky number 12 (12 months of the year, 12 apostles, 12 tribes, 12 signs of the Zodiac). Although in Italy, Friday the 17th is the unlucky day. Regardless of its ancestral origin, it appears that it took a firm hold in American society after 1907. That’s the year Thomas W. Lawson released his novel “Friday, the Thirteenth”, in which an unscrupulous broker takes advantage of the superstition to create a Wall Street panic on a Friday the 13th. This theory is promoted by Nathaniel Lachenmeyer in his book, “The Story of the World’s Most Popular Superstition”. Is there something to it?

I have to say that I noticed as a child that the school bus broke down one Friday the 13th, car trouble or food-borne illness on another Friday the 13th, and so on and so forth. Because of the fear of something awful befalling us on this day, people avoid driving or any activity that may put them in danger.

As a physician, or more specifically as a plastic surgeon that performs elective cosmetic surgery, I’ve seen the avoidance of Friday the 13th play out year after year. Patient’s will schedule their tummy tuck or other procedure on the 13th of the month. And just like clockwork, when they realize that that particular 13th is a Friday, they call back to reschedule. I don’t think of myself as superstitious but since these are elective cosmetic procedures, you might as well not tempt your fate or the patient’s fate, and just perform the operation the day before, Thursday the 12th, or Monday the 16th!

One thought on “Friggatriskaidekaphobia (Fear of Friday the 13th)”