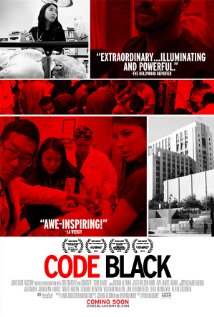 I think the official title of “Code Black,” a movie just released on June 20th 2014, is Code Black: A look into America’s busiest ER. Check out the trailer here. But I also think it’s a look into the future of healthcare for many Americans. The documentary, written and directed by an ER physician-in-training, Ryan McGarry, highlights the experience of doctors and their patients in the LA County emergency room, one of the busiest in the country.

It’s a sobering take on how many Americans receive their healthcare – through the emergency room of county hospitals. This includes the working poor, the indigent – all patients ostensibly with no insurance or inadequate government insurance (they point out that any of us, even the wealthy that fall on hard times, could one day find ourselves in a situation without health insurance). The film highlights the overwhelming amount of paperwork and regulation that slow down the ability of doctors to see waiting patients efficiently (some waiting up to 18 hours to be seen). Basically, it shows all that is wrong with healthcare and while they don’t provide an overall solution, that’s not the purpose of the documentary. It’s to highlight the problem and to galvanize politicians, bureaucrats, doctors and other “movers and shakers” to find a way to improve the situation.

The residents-in-training found their own way to deal with this sense of powerlessness. They made changes to the benefit of the patients in the waiting room. In one instance, they removed some patient beds in the ER and replaced them with chairs so they could see more patients at a given time (they do subtly point out the head nurse’s inability to think outside-the-box because of issues of policy). Making this documentary to highlight the struggles of county emergency rooms like Parkland in Dallas or Charity in New Orleans, will be their lasting testament of how they avoided complacency and overcame their collective sense of futility.

No solutions for American healthcare as of yet, but at least the problems are now front and center.

One thought on “Code Black: A look into the future of healthcare”