Since I started providing CoolSculpting in my practice in early April, there’s one thing I’m particularly happy that I did. I bought two machines! This was a gamble of sorts. Here I was, bringing a new technology into my practice that required a substantial investment and rather than playing it safe and getting one machine, I purchased two right off the bat. Why? Because I put myself in my patient’s “shoes” and decided that if I didn’t want treatments to take twice as long, neither would they (my patients). 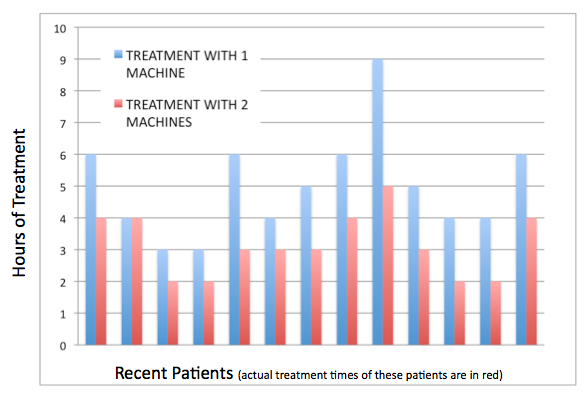 This bar graph represents recent consecutive patients we’ve treated. Our patient’s actual treatment time is represented in red. The blue bars represent how long their treatment would have taken if we only had one CoolSculpting machine in our office.

CoolSculpting non-surgically freezes fat using an applicator that you place on the area of concern. If you’re unhappy with your flanks, then you place the applicator on the “love handle,” and the applicator sucks the skin into the cup. Cooling panels within the applicator freeze the fat contained in that area of skin and reduces the fat by 25%. The fat is reabsorbed by the body without much fuss. No downtime, no compression garments or other annoyances that are sometimes required with liposuction.

The only problem is that to kill the fat, the applicator must stay in place for a full hour (2 hours for each of the outer thighs). So if you want both love handles treated, which obviously you would, it will take one hour on one side and one hour on the other side if you have only one machine. So when I was looking to invest in CoolSculpting, it was clear to me that two machines were necessary to treat multiple sites at the same time and provide the patient with the most efficient service and save some time.

How much time have we saved our patients? We’ve reduced the time of treatment by 36% when compared to the time it would take to treat a patient with only one machine. On average, each patient is saving 2 hours of time by undergoing treatment in our office with two machines rather than one. You might think that two machines should reduce treatment time by 50% but there are some areas that can’t be treated at the same time. For example, the applicator that is placed along the inner thigh can’t be placed on both inner thighs at the same time because they physically wouldn’t fit. But as long as there’s enough room, we can treat two areas at once. For example, you can treat either both outer thighs or both flanks or one inner thigh along with a spot on the abdomen at the same time.

While on average we save each patient 2 hours of treatment time, some patients will see more significant time savings. One patient needed 7 areas treated. If we only had one machine, it would have taken 9 hours (remember, the outer thighs take 2 hours each). Because we had two machines, we saved her 4 hours! While she chose to do her treatments over a couple of days, she could have done them all in the same day. Doing 4 hours of treatment on the same day is reasonable but doing 9 hours in one day sounds awfully boring but practically speaking, our office isn’t even open for 9 hours!

If you’re looking for no downtime and no needles, CoolSculpting is a great option for reduction of fat in those areas that exercise can’t help. More importantly, make sure you find a practice with at least 2 CoolSculpting machines so you have more time for the things you love to do.

One thought on “The Benefits of Two CoolSculpting Machines (DualSculpting)”