A recent study in the journal, JAMA Dermatology reviews lawsuits filed after receiving skin treatments with a medical-grade laser. The most common procedure leading to a lawsuit was laser hair removal. The study reviewed whether lawsuits increased when the treatment was provide by a NPO (nonphysician operator). Take a look at these very telling statistics from the study: 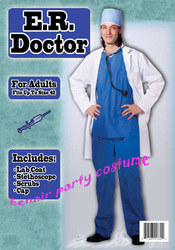 Just like on Halloween, anyone can dress up and act like a doctor. But check their credentials first!

Interestingly, even though a MINORITY of these procedures were performed by non-doctors, a MAJORITY of the lawsuits came after laser skin treatment by non-doctors.  This isn’t to suggest that doctors performing laser hair removal have no complications but as a plastic surgeon that is familiar with treating acute burns, I am more prepared to help a patient with recovery after one of these unfortunate reactions as opposed to a nonphysician with no training in burn or wound care.

Also, as found in the study, if you’re having your laser treatment in the mall or in some other non-clinic setting, take a second to ask yourself what you’re doing. You should not be surprised if you have an untoward effect after treatment in a hotel room!

I usually find myself talking about the risks of cosmetic surgery with a non-plastic surgeon but even when it comes to non-invasive procedures, don’t assume those treatments are harmless. It’s still important to seek out a board certified plastic surgeon.

Speaking of getting treatment in a mall or hotel room, what’s the craziest location you’ve heard of someone having medical treatment?