It’s front page news on the Drudge Report! Or maybe you read it directly from the source on London’s Express daily? We may finally have proof that Marilyn Monroe did indeed have plastic surgery to achieve that “natural” bombshell appearance! While I recognize you weren’t fixated on whether she had surgery or not, apparently proof that she had surgery is of interest to someone out there. In fact, medical notes and X-rays from 1950 to 1962 may fetch up to £20,000 ($31,852) during auction next month in Beverly Hills. 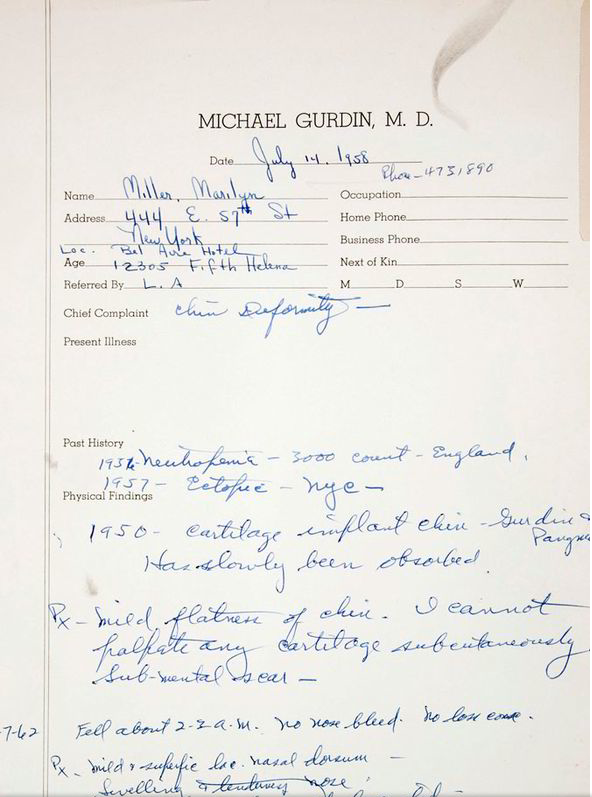 The Express provided teasers of the X-rays and notes from Monroe’s plastic surgeon, Dr. Michael Gurdin. After reviewing Dr. Gurdin’s notes from 1958, shortly after Ms. Monroe suffered a fall, this is my take on the topic. In his notes, seen above, you can make out several interesting things. First, he did a very thorough history of her medical issues and surgery from the past. He mentions a low white blood count (neutropenia is the term he used) from 1956. An ectopic pregnancy from 1957 (ostensibly before her affair with President John F. Kennedy). And then he mentions chin augmentation from 1950, performed by Dr. Gurdin himself.

He comments that most of the cartilage he used for her chin enhancement has reabsorbed. Which is not surprising problem to have with cartilage. Many plastic surgeons now use implants similar to the one seen below that do not absorb. 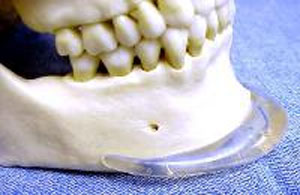 Typical silicone chin implant used for chin augmentation rather than the cartilage used for Marilyn Monroe.

Current chin implants can be made of material similar to GoreTex or silicone. Regardless, if the person buying the X-rays is hoping to find evidence of a chin implant using cartilage, the joke is on them. Cartilage, even if it was still present, isn’t readily seen on an X-ray the way bone is. So unless, there’s a great deal more tantalizing in this pre-HIPAA violation of her privacy, there may not be anything of value other than the evidence they already provided!

I’m curious if the auction house will allow a close examination of the documents prior to the sale. I would imagine that the value would decrease if there’s no additional points of interest than what you see above. As far as I’m concerned, the evidence presented clearly shows evidence of cosmetic surgery without having to buy her records. Another mystery solved!

One thought on “Marilyn Monroe – Did she have plastic surgery?!”