Aside from a breast reduction or correction of gynecomastia (excess male breast tissue), there are several interesting differences between what men and women want when it comes to plastic surgery. Their priorities are different, the concerns they have over their appearance varies in scope and focus aided by what is “normal” in society.  Below are some observations that I’ve noticed in my practice.  Also, I’ve included some timelines that 1) reveal differences in what women and men are looking for from a plastic surgeon and 2) suggest when they undergo those surgical or non-surgical procedures. (click on the images to see a larger view)

When it comes to facial procedures, men are conspicuously more concerned with their neck than women, especially at a younger age. Sure, women worry about their face and seek out a plastic surgeon for a facelift, but men primarily focus on concerns about their neck.

Here’s my theory on this.  Both men and women of course show signs of aging in their face but it’s more acceptable in society for a man to have a sagging face – it gives the impression of being more stately, more mature (think Robert Redford). But with women, a sagging face drives women to get a facelift.  However, fullness in the neck area in men does not get the same “pass” from society.  A full neck on a man makes them look heavier than they actually are. So while the woman chooses to get a facelift to counteract the signs of aging, a man focuses on a necklift to look trimmer, something society “prefers”.

(click on the images to see a larger view) 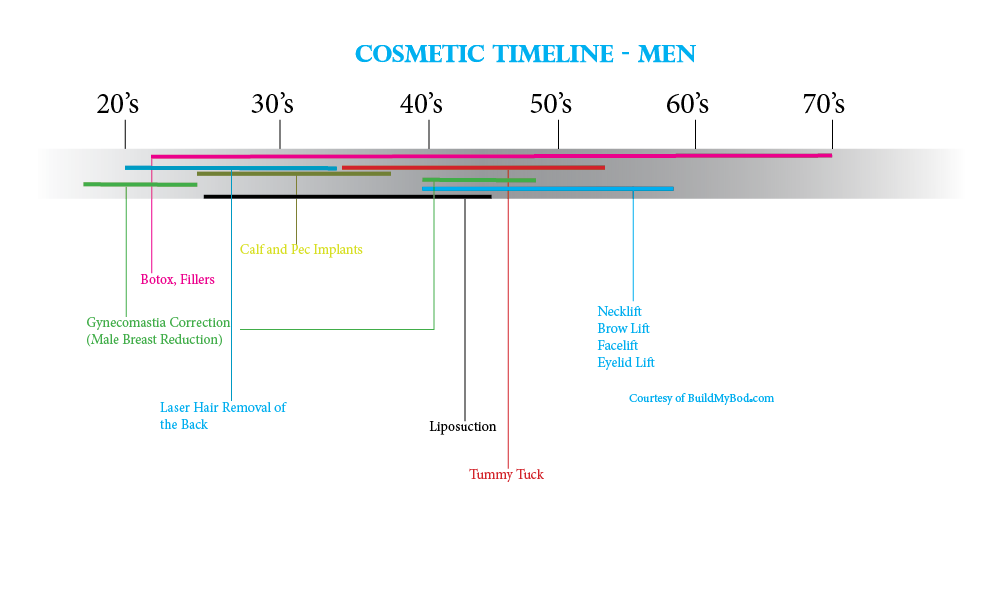 Women tend to get more injectibles like Botox and fillers such as Juvederm, Restylane or Radiesse. But men, while nowhere near the same level of use by women, are growing in numbers.  Non-surgical treatments such as laser hair removal are used by both men and women but the areas treated are very different. Women tend to want laser hair removal of the bikini area whereas men are more concerned about the back. I don’t think it’s a coincidence that both of these areas of greatest concern are the areas associated with partial exposure when wearing bathing suits and similarly, it’s also not a coincidence that our practice is busiest with these procedures before Spring Break and summer vacation!

Take a look at my timelines for both men and women and if you have any questions, feel free to submit your question in our reply section.