Are you a fan of Lil’ Kim? Have you followed her from her debut album with Junior M.A.F.I.A in 1995, the Notorious K.I.M. in 2000 or her entrance and release from prison in 2006?! She’s had a whirlwind career as a rapper/singer-songwriter and convicted felon but you gotta give her props for making it in life after living on the streets of Brooklyn as a kid.

And as many people who finally achieve success, they are subject to some of the vices of success such as plastic surgery. With her life in the public eye, she has so many photos of her throughout her career that it’s quite easy/interesting to document and note changes in her appearance.  By pointing out some changes, I’m not trying to be hateful or mean, but as a plastic surgeon, it is fascinating to evaluate changes in appearances and give an educated guess as to what someone has had done. So, no comments on whether Lil’ Kim looks bad or good, just objective observances.  And according to VH1, she’s supposedly shooting a Behind the Music episode and a source suggests that she’s gonna spill the beans in regards to her plastic surgery. So we’ll see if my following assessment is correct! 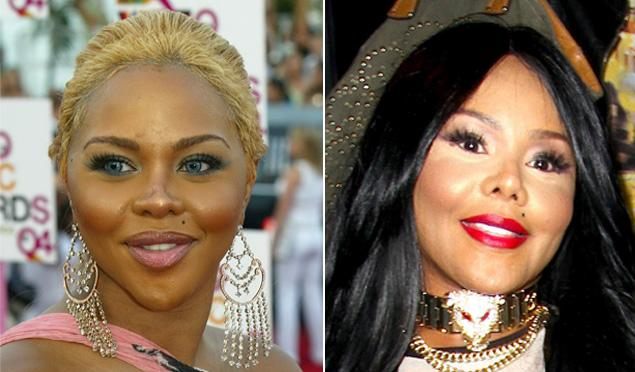 Let’s start at the top and make our way down. For a temporary change in her look, she appears to be wearing a wig in the photo on the right. Eyebrows look the same but then the eyes at first look different. But I don’t think she’s had surgery on her eyes. If you look at the shape of her eyes, ignoring the surrounding makeup, her eyes are the same shape. I think the way she has applied her eyeliner, eye shadow, etc gives the appearance of a surgical change in her eyes but again, I think it’s just the makeup. And for completeness, she had blue eye contacts in the photo on the left and that’s probably her natural eye color on the right.

The next stop down on her face is of course her nose.  In an effort to reduce the more ethnic looking nose associated with nostril shape, she had the skin and cartilage reduced in her nostrils to help narrow the nostrils. This is a very difficult procedure to get just right without it being obvious. The way the incisions heal can give an unnatural curve to the nostrils which is a dead giveaway that someone has had surgery. If you look on the internet for photos of Michael Jackson’s nose over the years, you can see the progression of his nose and during one stop on his rhinoplasty journey, his nose looks similar to Lil’ Kim’s. Similar to Janet Jackson’s nose as well.

She has also been using skin bleaching creams or light chemical peels to give her face that lightened appearance. And finally, the bottom half of her face looks rounder. This could be from fillers or fat injections but the real explanation may be simpler than that. In other photos on the internet, she appears very voluptuous and the new shape of her face may actually be from weight gain alone.  Keep in mind that the photo on the left was from 2004 and the photo on the right is from this year – 9 years later. So what do you think? Agree or disagree with my assessment?

2 thoughts on “Lil’ Kim in the Plastic Surgery News”