Bruce Jenner was on Jimmy Fallon’s show the other night and he drove home a point that is often missed by the bystanders of pop culture. And that point is, any celebrity, whether they’ve had plastic surgery or not, can be made to look like they’ve had bad celebrity plastic surgery by finding and posting their worst photo available on the internet. As for Bruce Jenner, his face looks fine in this video below when he’s got makeup on, so why don’t they post this photo of him? Because it wouldn’t prove the paparazzi’s point! 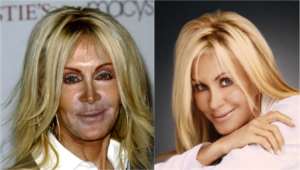 This is one of the Real Housewives. I’m not even sure she’s had surgery (maybe Botox, etc) but the photo on the left just looks like a bad hair day and no makeup!

That being said, I couldn’t find a good and bad photo of Mickey Rourke after plastic surgery…unfortunately they’re all unfortunate!

9 thoughts on “Celebrity Plastic Surgery – Is it Just Bad Photos?”