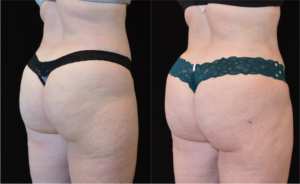 Check out the nice “shelf” to the upper buttocks after fat injections for a Brazilian Butt Lift.

How many times have you asked yourself this question?! OK, maybe never but if you are one of the many consumers out there who want a bigger booty, you probably assumed you had enough fat because we often think we have more fat than we really do. But don’t kid yourself, it takes a lot of fat, maybe more than you have.

In the video below, about 645cc of fat is needed for each buttock to give the patient the result she wants. While it is possible to remove 2-3L (2000-3000cc) of fat from the body, after purification of the fat and injection into the buttocks you’re left with much less – about half. That means you end up with 600cc of fat for each buttock. Even though 600cc sounds like a lot, you want to put as much fat into the buttocks as possible because only about 50% survives long term. So you’re left with 300-375cc of fat per buttock. That’s still a lot but you need to have reasonable expectations of what’s possible.

If you don’t think you have enough fat, there’s another alternative – an auto-augmentation of the buttocks can potentially give you the results you’re looking for in a Brazilian Butt Lift. This technique isn’t necessarily new but it is derived from a body lift, the removal of excess skin after massive weight loss. Since massive weight loss patients often lose fat in their buttocks, they too want more fullness in the buttocks while removing excess skin from their drooping backside. You can read more about this procedure here.

While a Brazilian Butt Lift isn’t for everyone, some folks out there are self-conscious about their backside so try not to be judgmental if this is something they want. Remember, we all have insecurities that some will think are silly but they’re very real to us.

Hope that helps. To check pricing on a Brazilian Butt Lift from a doctor near you, click here.

One thought on “Brazilian Butt Lift: Do I have enough fat?”